Our Priest-in-charge is Father Kevin Lien, who also serves as Associate Priest at the Eastern Orthodox Church of the Annunciation in Milwaukie, Oregon.

The Life of Saint Brendan the Navigator 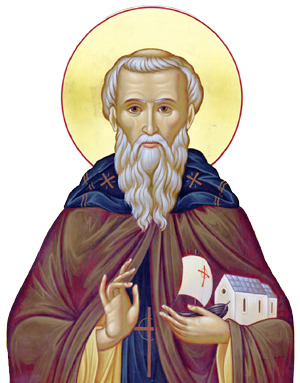 Saint Brendan was born in 484 near the port of Tralee, in County Kerry, Ireland. He was raised by Saint Ita and Saint Erc, the local bishop, who ordained him priest in 512.

In his youth, he learned the Old and New Testaments mostly by heart, and copied and codified the “Rules of the Monks of Ireland.” After his ordination, he became a monk and founded a hermitage at Ardfort, near Mt. Brandon (later named for him), on the West coast.

In 530, he determined, through a heavenly vision, to wander and spread the Gospel in foreign lands. For the rest of his life, he traveled widely with a group of monks to Scotland, Wales, Great Britain, and Brittany. He made all these voyages in Coracles, wooden framed boats covered in hide and waterproofed with tallow.

His most famous voyage was the search for the “Island of Paradise,” which lay to the West, beyond Ireland. On that voyage he visited the Faroes, Iceland, Greenland, and finally what is most likely Newfoundland.

In 1962, some petroglyphs were found in several caves in West Virginia which, when deciphered, were found to contain Chi Rho symbols and references to the sun shining into these caves on the feast of Christ’s incarnation, and a mention of the Blessed Theotokos. These inscriptions were also found in Ireland, leading archeologists to the conclusion that these pictographs were most likely drawn by Irish monks. Saint Brendan and his companions were perhaps the first Europeans to discover North America!

Saint Brendan reposed in 577 at the age of 93 and is buried at Clonfert, the last monastery he founded near the West coast of Ireland, the land he loved. He is considered one of the “Twelve Apostles of Ireland,” and is venerated today around the world. He is the patron of mariners and seafarers, bar pilots and navigators, travelers, adventurers, scuba divers — and even whales, with which he had many encounters during his journeys.

The Mission of The Orthodox Church in America, the local autocephalous Orthodox Christian Church, is to be faithful in fulfilling the commandment of Christ to “Go into all the world and make disciples of all nations, baptizing them in the name of the Father, and of the Son and of the Holy Spirit…”

St. Brendan Orthodox Church is part of the Diocese of The West, which is presided over by The Most Reverend Benjamin, Archbishop of San Francisco and the West. Our mission is bringing the joy of Christ's resurrection to those who have never heard the Good News, and to strengthen and encourage the faithful who reside within Astoria and the local area.

The Holy Scripture is a collection of books written over multiple centuries by those inspired by God to do so. It is the primary witness to the Orthodox Christian faith, within Holy Tradition and often described as its highest point. It was written by the prophets and apostles in human language, inspired by the Holy Spirit, and collected, edited, and canonized by the Church.

Holiness or sainthood is a gift (charisma) given by God to man, through the Holy Spirit. Man's effort to become a participant in the life of divine holiness is indispensable, but sanctification itself is the work of the Holy Trinity, especially through the sanctifying power of Jesus Christ, who was incarnate, suffered crucifixion, and rose from the dead, in order to lead us to the life of holiness, through the communion with the Holy Spirit.